Tahltan blockaders call on their allies 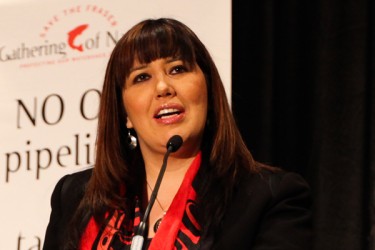 Blockaders in Tahltan Nation issued an eviction notice to Fortune Minerals on Aug. 14 over the firm’s proposed $10-billion open-pit coal mine in what they say could destroy three northern B.C. rivers vital to their culture and lands.

For years Fortune’s 4,000-hectare Arctos Anthracite Project has generated opposition and controversy amongst the Tahltan. Environmentalists have dubbed the region, more than 300 km northeast of Prince Rupert, the “Sacred Headwaters.”

The land defenders have called themselves the Klabona Keepers Elders Society, and have vowed to protect the Skeena, Nass and Stikine rivers that could be affected by the project. Klabona is the Tahltan name for the river headwaters.

“We are calling on those people who have stood with us before, and who have a connection to the Sacred Headwaters, to stand with us again to protect this area once and for all,” said society spokeswoman Rhoda Quock.

Although Tahltan nation leadership were not behind the blockade – and have been engaged in discussions with the province and company for months – it says it supports the blockaders’ demands and reiterated their opposition to the project proceeding without their permission.

“We have had concerns with a coal mine in the Klappan for many years,” said Tahltan Council President Annita McPhee. “Our people want to see the Klappan Sacred Headwaters permanently protected.

“We have been fighting this development for so long. It is time to start building long-term solutions that will protect our land and culture. Fortune Minerals’ project is located in a critically important area that requires long-term management and protection to preserve cultural and ecological values for the Tahltan people, and all of B.C.”

The blockade is near the site of several Fortune temporary structures, which irked hunters in the area who said company helicopters were scaring game away from the rich hunting area.
In Vancouver, dozens of protesters rallied downtown on Aug. 21 in support of the blockade. They decried Fortune’s continuing work in the area despite the eviction notice and clear refusal of the Tahltan to consent to the project.

The Union of BC Indian Chiefs has also come out in support of the protests, saying that the grievances are not new.

“The response should not be a surprise to Fortune Minerals,” said Chief Bob Chamberlin, vice-president of the Union of B.C. Indian Chiefs, “as Elders and leadership of the Iskut First Nation, Tahltan Band Council and the Tahltan Central Council have expressed concerns with a coal mine in the Klappan for some time now.

“Their collective and consistent message has been the permanent protection of the Klappan, the Sacred Headwaters. We firmly support the permanent protection of the Sacred Headwaters.”
Fortune Minerals has said the protest briefly shut its mining camp, which is gathering information as part of the required environmental assessment process. It said the coal mine would bring jobs and development to the region.

“While we respect the right to peaceful protest, we believe very strongly that the best forum to address concerns about the project is through the permitting and environmental assessment processes where all issues are examined in detail and allows decisions to be made from an informed position,” said company spokesman Troy Nazarewicz. “We are consulting with Aboriginal communities to address their questions about the project.

“We will continue to work with all Aboriginal groups and stakeholders throughout the environmental assessment process, and we are confident their concerns can be addressed through the regulatory process. This project will bring long-term employment and economic benefits to local communities.”

The UBCIC’s secretary-treasurer Marilyn Baptiste said that the B.C. government could easily find a solution to the impasse if it addressed the long-term concerns of the Tahltan.

“In order for the Government of BC to find long-term solutions they must begin by meaningfully addressing the profound concerns of the Tahltan people,” she said.

“The (rivers’) long-term conservation is essential to the inherent rights of hunting, fishing and the continuation of the cultural traditions that have been continuous for generations from the headwaters to the Pacific.”

The Tahltan Central Council – comprising both Tahltan and Iskut First Nations – asked for a resolution at this year’s annual meeting calling for the permanent protection of the area. They decried what they warned would destroy Mount Klappen and impact 4,000 hectares of pristine wilderness. They are currently in preservation discussions with the provincial government.

The struggle to protect the “Sacred Headwaters” from coal mining has attracted the backing of renowned National Geographic explorer-in-residence Wade Davis, who has a home in the region. It’s also seen the formation of an environmental advocacy group, the Skeena Watershed Conservation Coalition.

The latest blockade began in earnest after the expiry of the 24-hour eviction notice, as 30 Elders vowed to stop all Fortune activities. But it’s not the first on Tahltan territory. In 2005, Fortune was blockaded from entering the Klappan region – leading to 15 Elders’ arrests. In another fight with industry, Shell Canada gave up controversial shale gas exploration in the area last year, after a decade of Tahltan protests.

“We didn’t fight Shell for 10 years so a coal company could come along and build an open-pit mine in the heart of the Sacred Headwaters,” she said. “We’ve stopped bigger industrial projects before and we’ll do it again with help from our supporters and allies.”