Premier, BC Cabinet meets with BC First Nation leaders 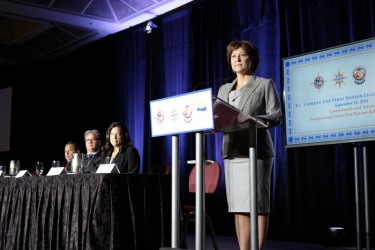 It was described as a historic meeting of First Nations leaders, the Premier of British Columbia, Christy Clark, and her Cabinet, who gathered Sept. 11 to “dialogue” on transforming the First Nations-Crown relationship.

The meeting was spurred on by the new legal landscape facing the province since the Supreme Court of Canada decision in the Tsilhqot’in case which recognized, for the first time in Canada, that Aboriginal Title exists beyond the reserve. It’s a game-changer, First Nations leaders believe, because much of British Columbia is unceded territory.

Unfortunately, that’s about all that was accomplished at this “first political meeting on these fundamental political and legal questions”—a dialogue.

They couldn’t even come up with a joint communique on the meeting.

In a statement from the First Nations Leadership Council, which hosted the gathering, the organization said it was disappointed that the province declined to commit on any of the four key foundations set out by the First Nations for the work they see ahead.

1.  Acknowledgement that all our relationships are based on recognition and implementation of the existence of Indigenous peoples’ inherent title and rights, and pre-confederation, historic and modern treaties, throughout British Columbia.

2.  Acknowledgement that Indigenous systems of governance and laws are essential to the regulation of lands and resources throughout British Columbia.

3.  Acknowledgment of the mutual responsibility that all of our government systems shall shift to relationships, negotiations and agreements based on recognition.

4.  We immediately must move to consent based decision-making and title based fiscal relations, including revenue sharing, in our relationships, negotiations and agreements.

“This work is too important to delay, and the First Nations Leadership Council and First Nations in BC await and look forward to a timely response regarding the foundations of our work together,” wrote the council.

In the statement from B.C., the government “acknowledges” the Tsilhqot’in decision is an “opportunity to work together to build a new path for recognition and reconciliation in the province.”

BC said it is without question and dispute that Aboriginal title in the province exists.

“The challenge and opportunity is how to implement title across British Columbia given that a diversity of views exist on how best to achieve this in the most collaborative and timely way.”

The government has “acknowledged” the four foundational principles set out by the BC First Nations, and has committed to an annual gathering and ongoing “government-to-government” engagement.

The Leadership Council says “First Nations remain resolute in exercising our respective title and rights, and treaty rights according to these foundations for the benefit of the current and future generations.

“We will steward our lands and ensure that they are responsibly managed and work toward building strong First Nations governments, communities and economies.”