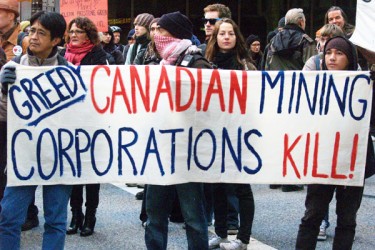 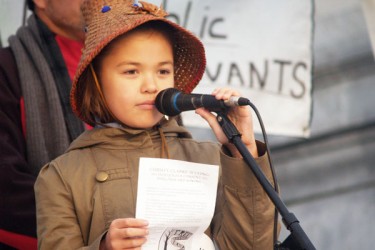 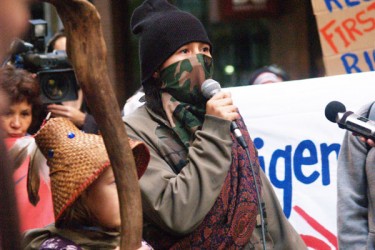 Central British Columbia is turning up the heat on the mining industry as the Tsilhqot’in Nation heads to court against Taseko Mines, which has faced protesters at a proposed mine site.

Despite having its controversial Prosperity Mine blocked by the federal government during a review of the initiative, Taseko is challenging that decision in court, and in a separate case, is seeking an injunction against Indigenous protesters blocking test sampling in the proposed mine area south of Williams Lake.

“To have a mine there is not acceptable to us by any means,” said Chief Joe Alphonse, chair of the Tsilhqot’in National Government. “This area is a spiritual area where our spiritual healers go for ceremonies.

“To us it’s like a church or temple. We’re not going to the Vatican and saying we want the Vatican converted to a casino hall. Well, that’s the equivalent. And (the mining company is) going to lose, and that’s going to be a tough pill for them to swallow. They’re going to continue to face resistance and continue to lose support.”

Chief Alphonse said that his nation plans to “resist” mining on their territory, through the courts and through protests , and that the problem is not simply Taseko, but the industry in general.

“The mining sector is the one sector that is refusing to change with the times when it comes to dealing with First Nations,” he said. “They have to do everything to get consent. They have to consult First Nations people if they’re going to be working on our territory.

“Until we have a say over 100 per cent of our territory, we won’t give in. If we’re going to move this country, we need mining reform.”

In fact, mining projects across Canada are currently facing protests from a number of First Nations, explained Ramsey Hart, Canada program coordinator with MiningWatch Canada, an organization working for reform of the mining industry.

From the Tsilhqot’in nation to the mining “Ring of Fire” in northern Ontario, and in the Yukon and the Quebec-Labrador boundary, many Indigenous people are fed up with the lack of meaningful consultation from government and mining companies, Hart said.

“One of the most fundamental issues is the impacts mining has over Indigenous rights and title,” he said. “In many cases it’s on unceded territory.”

“The most basic reform needed is an acknowledgement of free, prior and informed consent for mineral development activities; not just mines but also exploration activity. [And] increased participation in deciding how projects will get reviewed and whether or not those projects should go forward.”

In historic landmark cases, Canadian courts have ruled that “free, prior and informed consent” is required from First Nations in order for resource exploitation to take place on traditional territories. Although the government has, in theory, enshrined this principle in its operations, in practice the industry continues to operate in much the same way as in the past.

“We have not found ways for there to be a meaningful collaborative process for reviewing projects, for there to be benifit-sharing from those projects if they go forward,” Hart added.

“It pretty much impacts all First Nations throughout British Columbia. Their fight is our fight.”

“They require free, prior and informed consent before any proposals. We have to be consulted at the outset, not after companies have invested tens of millions of dollars into a proposal. That simply doesn’t happen.”

Phillip said he is concerned that the Prosperity Mines proposal will become the epicentre of a new conflict across B.C. over First Nations rights, particularly as Premier Christy Clark recently announced that the provincial government has lost faith in the treaty process and is prepared to negotiate outside it.

“It’s an attitude on the part of the (B.C. Premier) Clark government that recognition of our title and the legal obligation to consult is somehow optional,” Phillip said. “In fact it’s a legal requirement.”

“Without question we’re heading towards conflict. There has to be a dramatic shift in their approach to our Aboriginal titles and rights. There has to be unconditional recognition of that legal reality.”

“A lot of people have been displaced, and mine-tailing ponds have made our people sick with cancer,” said Telquaa, from the Wet’suwet’en nation in northwest B.C.
“In central B.C. there are so many mines.”

The problems many First Nations are facing around mining was recently addressed at Vancouver’s Indigenous Assembly Against Mining and Pipelines, a conference which drew participants from Indigenous communities across B.C.

On Nov. 6, the conference organized a large protest march in downtown Vancouver, calling attention to many mining companies headquartered in the city which face First Nations opposition.

“It’s the duty of the companies and of the government to come forward and inform the First Nations that they won’t be infringing on us in any way,” Chief Alphonse said, adding that the Taseko mine site is the location of one of the oldest archaeological finds in his nation’s territory. “The mining sector thinks they are above the law. There’s something very wrong with the way they do things.”

Taseko mines application is for 59 drill holes, and a second application is to subcontract logging to clear an area of land where the mine will be located.

Taseko Mines Limited describes the Prosperity Mine as “One of the largest undeveloped copper-gold deposits in Canada,” hosting what it believes is a “1.0 billion tonne measured and indicated resource containing 5.3 billion pounds of copper and 13.3 million ounces of gold.”

In a press release, Taseko said, “Taseko Mines Limited … was unlawfully obstructed from conducting work on the proposed New Prosperity Gold-Copper project. As a result of this interference Taseko has today initiated legal proceedings against the individuals responsible for the obstruction and is seeking an order restraining them.”