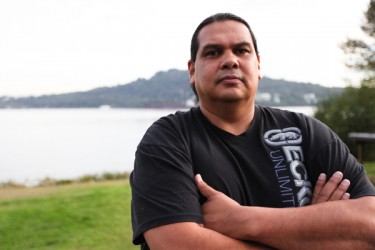 A renowned Lummi Nation carver is helping solidify connections between Indigenous allies north of the border fighting a raft of fossil fuel megaprojects, from coal exports to pipelines to Alberta’s oil sands.

Windspeaker has learned that Jewell James, a celebrated carver who also serves as director of the Lummi Sovereignty and Treaty Protection Office, is to carve a large pole to be erected next year in one of the First Nations impacted by pollution from the oil sands, likely during an annual Tar Sands Healing Walk attended by hundreds of supporters every summer.

The Lummi Nation of Washington State is currently struggling against development of a controversial thermal coal terminal as well as bitumen-bearing trains bound for the coast. Their opposition closely mirrored among First Nations to the north in Canada.

James traveled to Tsleil-Waututh Nation territory for a Sept. 29 ceremony raising a nearly seven-metre pole he carved and donated to the North Vancouver first nation as a symbol of solidarity in their fight against coal and the Kinder Morgan’s proposed TransMountain pipeline and oil tankers.

“It was such a loving gift,” Sundance Chief Rueben George, with the Tsleil-Waututh Sacred Trust, told Windspeaker. “Our nations have been collaborating and working together for centuries. My grandfather adored the Lummi people.

“This solidifies our relationship with the Lummi Nation. That was very special to continue generations working with one another.”
Of the second pole, James told Windspeaker “We found out about the Native people up in the tar sands area who are dying from cancers caused by the contamination that has spread all over. We wanted to try to get people to know they’re not alone in their battles ... to protect the environment.”

James said the brightly coloured Tsleil-Waututh gift took him more than five months to carve on evenings and weekends, and that he was not paid for his work. He said he wanted to show his children the importance of sharing one’s gifts.

One of those invited to witness the pole-raising ceremony this fall was Melina Laboucan-Massimo from Lubicon Cree First Nation in Alberta. She is a climate and energy campaigner with Greenpeace Canada and is currently completing her Masters in Indigenous Governance at the University of Victoria.

She told participants of the direct impacts of the oil sands on her community, including a major oil pipeline rupture that caused her family headaches, nausea, burning eyes, dizziness and shook their confidence in safe drinking water. She also spoke of the high levels of rare cancer forms in first nations surrounding the oil sands megaproject.

“That hit us pretty hard,” James explained. “We heard her talk and were moved by her words, so we promised to do a pole.”

Laboucan-Massimo told Windspeaker the massive gift is an “amazing” symbol of solidarity between Indigenous nations.
“I was pretty floored by that!” she admitted. “I never thought someone would actually gift a pole to our communities in solidarity with what we’re going through.

“I know how much work a pole is, how much time and effort they take, and how sacred they are. They have so much significance for Coast Salish communities.”

What links together the issues facing the Coast Salish – fears of oil tanker accidents, pipeline ruptures, and a massive increase in coal exports through their traditional waters – are echoed also in Cree battles to halt the oil sands, and some Indigenous concerns over natural gas fracking, James said.

George said the gift is an everyday reminder that his band isn’t alone in hoping to stop the wholesale exploitation of fossil fuels, and the risks he said they pose to his nation’s waterways and traditional lands.

“What links those things together isn’t just the fossil fuel problem,” he explained, “but our cultural and spiritual belief that we have a ceremonial connection to our lands and waters.

“These fossil fuel companies are offering millions of dollars in settlements, but you can’t put a price on the sacred. We need to protect the sacred ... That’s why I say that we’re not protesters – we’re protectors.”

Now George, Laboucan-Massimo and James hope a tar sands healing pole can inspire other communities once it’s completed and travels extensively through their territories en route to its resting place.

With a number of bands surrounding the tar sands and their extensive tailings ponds and open pit mines, Laboucan-Massimo said the upcoming pole’s location hasn’t yet been chosen, but she revealed that the annual walk seems like the most appropriate time because of its message of healing – a message not only about human health and the environment, she added, but also restoring Native cultural connections broken by colonization.

“There are so many different communities affected by the tar sands,” she said. “Ultimately, what we’re healing from is the legacy of colonialism, which has really wreaked havoc on our communities – a lot of divide-and-conquer, a lot of hurtful things happening.

“(The tar sands) are putting our communities between a rock and a hard place. It’s so painful to see the land destroyed as it is, and how much it affects and divides our communities. We really need to look at healing.”