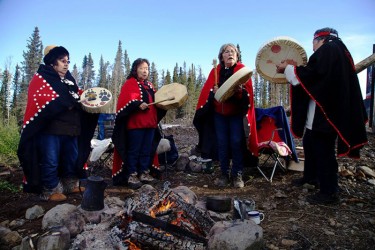 A delay in an enforcement order is a huge victory for those on the Red Chris Mine blockade.

“Injunctions are the norm on how to deal with any type of Indigenous (action) … when we’re blocking access to any type of development or industry development.

“Usually when that comes forth and a company applies for an injunction enforcement order, 99 per cent of the time it’s rubberstamped approved and granted and it gives the jurisdiction to the RCMP to go make arrests right away,” said Kanahus Manuel, who was named in the injunction order applied for by Imperial Metals Corp., which owns the Red Chris Mine.

Manuel contends that two planes of RCMP officers were flown to the blockade site anticipating receiving the legal nod to take action on Oct. 8, when Imperial Metals Corp. was heard in court.

Instead, Vancouver Supreme Court Justice Christopher Grauer ruled that Imperial had to wait until Oct. 14 before RCMP would be given the go-ahead to remove those blocking access to the nearly-completed Red Chris copper mine on Todahgin Mountain. Noted in the court order are two roads leading to the mine from Highway 37.

On Oct. 14, the Klabona Keepers and their supporters moved the grandmother’s fire, which they had burning on the single road they were still blocking, to the side in order to avoid criminal charges. The fire continued to burn, said Klabona Keepers on Facebook, as “our members down south apply for a court hearing this morning.”

Joining the Klabona Keepers on the line are members of the Secwepemc First Nation and other environmental activists.

Manuel says that Klabona Keepers fought the injunction based on a precedent set by Grauer, who, in 2011, granted an injunction in favour of Tsilhqot’in First Nation preventing Taseko Mines from conducting exploration work in an area that is now to be designated Dasiqox Tribal Park.

In the same court hearing, Taseko failed in its bid for an injunction to stop the Tsilhqot’in First Nation from blocking the company’s access to the site.

This is the second roadblock put up at Red Chris mine by the Klabona Keepers. The first roadblock, targeting two roads, began Aug. 8 and ran for two weeks. After regrouping and educating the communities about the purpose of the blockades, a second blockade began Aug. 29 on one road.

The day of the proceedings in the Vancouver court room, there were 40 people on the line, says Klabona Keepers spokesperson Rhoda Quock, who has been on site regularly.

“There are more people coming in every day,” said Quock, who is also named in the Imperial Metals’ court order. “It doesn’t only concern us with what happens….It concerns everybody.”

There are people at the blockade from around B.C. and as far east as Ottawa. The concerns cross age groups and provincial lines, she said.

Spurring the Tahltan-Elder led group into action was the tailing pond spill of the Mount Polley mine on Aug. 4 in Secwepemc First Nation territory. Mount Polley mine is also operated by Imperial Metals. Manuel was involved in the Mount Polley encampment that began Aug. 18 and ran for two weeks, in which time the group monitored the area after the spill and collected information from the people impacted.

After breaking camp, Manuel and others traveled to different communities impacted by the Mount Polley disaster to supply information. They were called by the Klabona Keepers and Iskut First Nation to make a presentation, which occurred between the first and second blockades of the access roads to Red Chris mine. Among the concerns voiced was the contention that Red Chris tailings pond is already leaking, says Manuel.

Grauer also granted Klabona Keepers’ application for change of venue. Court proceedings are now taking place in Terrace, BC, which is one-third of the 22-hour by-road travel time that Vancouver presented.

“That would make it totally impossible for the Elders and people to travel to Vancouver,” said Manuel, who applauded Grauer’s decision.

While the fire has been set aside, the Klabona Keepers say on Facebook, “This action is being taken to protect the Elders and youth from RCMP action ordered by the provincial and federal system of government.”