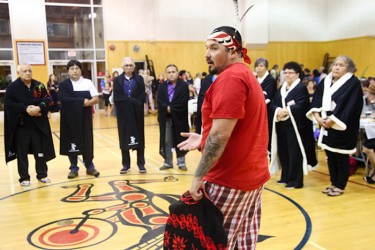 As the National Energy Board continues to hear oral presentations about the proposed expansion of Kinder Morgan’s TransMountain pipeline to Burnaby, B.C., First Nations on all sides of the Salish Sea are pressing forward with an intertribal treaty to protect their waters from oil tankers.

On Nov. 9, backers of the International Treaty to Protect the Salish Sea — launched in late September with a feast — are meeting at Tsleil-Waututh Nation to strategize expanding the document beyond its original 11 First Nations signatories. Its endorsers so far include tribes south of the U.S. border in Washington State.

The treaty calls for unity to defend the traditional marine territories from oil pipelines and tanker traffic, based on Indigenous law, “the highest law of the land,” said Jeri Sparrow of

Musqueam Nation, before signing the pact.

“This whole process has been led by our own people,” Tsleil-Waututh elder and spiritual leader Leonard George told a large crowd attending a feast the night before the treaty’s signing ceremony.

Kinder Morgan’s proposal to double its existing pipeline through B.C. carries a $5.4 billion price tag. It would carry 890,000 barrels of diluted bitumen from Alberta’s oilsands to the Lower Mainland, but opponents fear not only pipeline leaks or ruptures, but also a dramatic increase in daily oil tanker traffic through the Burrard Inlet, part of the Salish Sea.

The fact that the treaty is based on Indigenous law, not the Canadian legal system, is crucial as pipeline opponents turn to the courts to assert their rights and title.

In mid-October, George and other Tsleil-Waututh members addressed the National Energy Board, and representatives spoke of the nation’s history in the region and the importance of a clean waterway to their way of life.

“We asked for consultation directly with the government,” he recalled. “In our presentation at the NEB, we went there to say it’s a flawed process and we left.”

The nation’s culture and language manager Gabriel George told the review panel that it has the power to make a decision on behalf of First Nations even though they have been living on the land for thousands of years. He was then joined in song by dozens of supporters from his nation, Rueben George recounted.

“All of our family sang,” he recalled. “It was really strong, unifying and beautiful.

“The history (Gabriel) gave really solidified why we’re doing what we’re doing. It is unifying all the families on our nation Ö That’s bittersweet. Through history, the good and bad, we’re still here. We never moved off the land.”

The hope is for the intertribal treaty to gather a growing number of backers beyond its initial signatories—Lummi nation in Washington State, in B.C. the Squamish, Sto:lo, Kwantlen, Tulalip, Sts’ailes, Xaxli’p and St’at’imc nations.

“Coast Salish people stand united by our ancestral ties to each other and to the Salish Sea,” the treaty states. “Now the waters of the Salish Sea and the rivers that drain into it are threatened by proposals to drastically increase shipping of oil and bitumen and the inevitable risk of oil spills.

“By affixing our signatures hereto, we the undersigned commit ourselves to doing everything in our lawful power to protect our territories from the Kinder Morgan expansion project, and any other tar sands projects that would increase the transportation of tar sands oil through our territories.”

According to the document, Indigenous peoples assert the “authority and duty to protect” the Salish Sea and its tributaries, and therefore tanker and pipeline plans are “illegal as a matter of our ancestral laws, Canadian constitutional law, and international law on the rights of indigenous peoples.”

The assertion of ancestral law is bolstered by the Tsilhqot’in nation’s recent Supreme Court of Canada victory, in which the top court upheld their title to a large swathe of their traditional territories. Other First Nations and aboriginal leaders portray the decision as a ground-breaking acknowledgement that governments and corporations must obtain consent, not simply consult with, First Nations before developing their territories.

Xaxlip nation chief Darrell Bob Sr. said his ancestors before him set the example for today’s generation to defend and protect the land and his people.

“They stood up for the rights of our people … to adhere to the laws of the land, to protect it,” he said at the signing ceremony. “This is what we’ve dedicated ourselves to as spiritual people.

“We’re here to sign this treaty on their behalf to protect the land and to stand up in front of the people to protect that in the best manner.”

Outside B.C. — which is largely unceded territory not under any historical agreement with the Crown — treaties are common between the Crown and Indigenous communities. But a growing number of efforts are reviving the intertribal pacts common before colonization.

On Sept. 23, 11 bands in Alberta and Montana signed an historic treaty to protect bison populations — reportedly the first intertribal treaty since the 1855 Lame Bull Treaty on Aboriginal hunting rights.

A more recent example is the Save the Fraser Declaration against the Enbridge Northern Gateway pipeline, which has garnered more than 100 signatures and, like the Salish Sea treaty, is rooted in Indigenous or ancestral law.