Gladys Radek: A woman on a mission 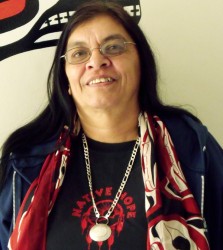 Gladys Radek is a Gitxsan/Wet’suwet’en First Nations woman from Morcetown. She has been nominated in the Social Change category in the CBC News Champions of Change contest which celebrates volunteerism, and she’s made it into the top 10 as a finalist. Voting ends Jan. 6, 2011.

Radek is on a quest to seek justice for the countless number of Indigenous women who have either gone missing or have been murdered throughout Canada, and focuses especially on those who have been lost to violence or simply vanished along what has become known as the Highway of Tears, a notorious stretch of Highway 16 between Prince George and Prince Rupert.
More than 30 women, many of them Aboriginal, have mysteriously disappeared or have been killed along the highway. In March 2006, Radek joined a walk to honor those women. The group walked from Prince Rupert to Prince George to participate in the Carrier Sekani Tribal Council symposium where the Highway of Tears initiative began.

“Representatives of government, police, First Nations leadership, such as the Assembly of First Nations and the Chiefs of Ontario, and the victimized families all gathered and presented at this three-day event,” said Radek.

The symposium brought out “a lot of tears, pain and anger” on all sides, and participants agreed upon 33 recommendations pertaining to violence prevention, community development, family support and emergency planning.”

Radek’s quest for justice for these missing or murdered women is not only political, it is also personal. The issue hit close to home when her own niece, Tamara Chipman, who was only 22 years old at the time, “disappeared out of Prince Rupert on Sept, 21, 2005.” Chipman remains missing to this day.

According to Radek, it was Chipman’s disappearance that “was the catalyst” that started the grassroots movement Walk4Justice in Vancouver. Walk4Justice was created, said Radek, as a meeting of the minds between herself and Bernie Williams, a Skundaal of Haida Gwaii who lost her mother and two sisters to violence.

“We were very angry at the inaction on the system’s part at not paying attention to those who have gone missing and/or have been murdered.”

People do not think of how the missing and murdered women affect those left behind as family members.
“It is very difficult,” said Radek.

She spoke about how her niece “was a young mother at the time she went missing. She left behind a two-and-a-half year old boy. She was my brother’s only child. I am still looking for her, and so is her family.”

As a co-founder of Walk4Justice, Radek has organized three walks to date. The first was a 4,000-kilometre event from Vancouver to Ottawa during the summer of 2008. On June 21, National Aboriginal Day, Radek set out with a caravan of volunteers, and walked in 10 kilometre relays to take a message to Parliament Hill. Another walk is scheduled for June 2011.

Walking does not come easily to Radek. She has a prosthetic leg since losing hers in a hit and run incident years ago, but she says that “her pain is not as big as the pain in the people’s hearts who have lost their loved ones and are still looking.”

Between walks, Radek organizes vigils, advocates in communities and updates a Walk4Justice databank of missing women.

When asked what message she is trying to get across, Radak replied “I want people to pay attention when a woman goes missing, investigate all disappearances and murders equally, including those of sex workers, and have a national symposium, as well as a public inquiry, into how and why these women go missing.”

The whole organization Walk4Justice runs on volunteers and donations, and Radek says “We encourage you to walk with us if you can, and give us support. You can contact me at frillyfrog08@yahoo.ca and I will be more than happy to give you more details.”