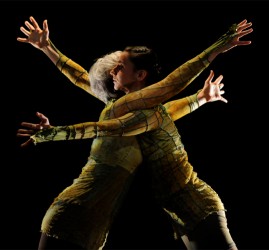 The 2016 Vancouver International Dance Festival, to be held Feb. 28 to March 19, will feature Raven Spirit in its impressive line-up of dance works from internationally-celebrated artists and local favorites.
Raven Spirit will perform Frost Exploding Trees Moon, which will be staged March 13 at 2 p.m. and 4 p.m. at Woodwards Atrium at 149 West Hastings St.
It is a solo piece performed by Michelle Olson and tells the story of a woman who follows her trapline, builds her camp, and settles into “the centre of her world of breath and perception.”
Olson is a member of the Tr’ondëk Hwëch’in First Nation and the artistic director of Raven Spirit Dance. She received a Bachelor of University Studies at the University of New Mexico and continued her dance training at the Aboriginal Arts Program at the Banff Centre.
Raven Spirit is a contemporary dance group that explores stories from an Aboriginal worldview. It incorporates other expressions, such as traditional dance, theatre, puppetry and multi-media to tell these stories.

The Frost Exploding Trees Moon piece is based on “body positions and attitudes of Indigenous hunting cultures of the northern forests. The movement is close to the ground and does not impose upon the environment, but rather seeks to disappear into the forests so to blend into the natural environment,” reads content on the Raven Spirit website at ravenspiritdance.com .

The dance festival will include a series of free-for-member performances (membership fee, $3) at the Roundhouse Exhibition Hall, in addition to free site-specific works, like the Raven Spirit performances, at the Atrium.