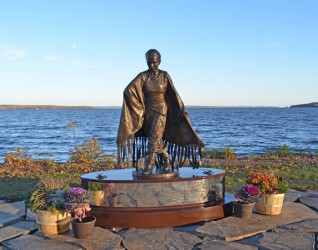 A monument commemorating Shannen Koostachin, a young Cree activist from Attawapiskat First Nation, was unveiled on Oct. 24 at the New Liskeard waterfront. Koostachin led the struggle for a new school in Attawapiskat, and was nominated for the International Children’s Peace Prize.

Tyler Fauvelle, based in Sudbury, created the figurative bronze sculpture. It depicts Shannen dancing in traditional regalia, and features symbols reflecting her Cree heritage.  Jules Arita Koostachin, multi-media artist and a relative of Shannen’s, led the commemorative project, which included installing butterfly benches near the monument, and the production of a short documentary film.

Kenneth (Jake) Chakasim, lecturer with the Laurentian University School of Architecture, and Rick Miller, an accomplished Canadian photographer and videographer, were part of the project team.†

When the only elementary school in Attawapiskat was condemned, and replaced with portable trailers that were cold and mice-infested, Shannen led the youth-driven Attawapiskat School Campaign, persistently advocating for a “safe and comfy” school. The students eventually succeeded, but Shannen didn’t live to see it. She was 15 years old when she died suddenly in a motor vehicle accident in 2010.†Family, friends and community started Shannen’s Dream, a campaign for proper schools for all First Nations children across Canada, and for quality, culturally-based education.

Photo option: Shannen Koostachin, the Cree youth who led the struggle for a new school in Attawapiskat.